Sweden will continue to hold the IHP Chairmanship until the lst of July, 2010

Sweden will continue to hold the International Humanitarian Partnership (IHP) chairmanship after the beginning of next year. Denmark, who stands next in line, has asked Sweden to extend its chairmanship until the 1st of July, 2010, and Sweden has agreed.

“We have so many other activities in the coming months that our resources will not be enough to take over the chairmanship until the 1st of July,” Stig Hammerhoj, head of the international department of the Danish Emergency Management Agency (DEMA) said.

The Danish request to extend the Swedish chairmanship came up at IHP’s biannual meeting in Brussels at the end of November. The current chairman of the IHP, Kjell Larsson, said at the meeting that he did not have any reservations about Sweden continuing to hold the chairmanship for an additional half year.

“This can be a positive thing. A year is almost too little time. It takes a few months for a country to adjust to the position and then to start accomplishing things”, Mr. Larsson said.

This lead to a discussion and a suggestion that a chairmanship period of one and a half years, or 18 months, should be made permanent. Both this suggestion and the decision that Sweden should hold the chairmanship until July, 2010, were agreed to by a unanimous vote. 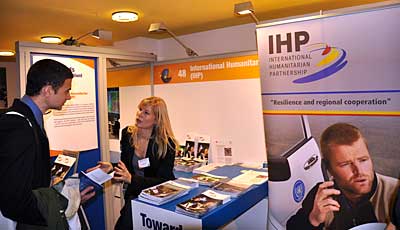 The International Humanitarian Partnership (IHP) participated with a display at the Civil Protection Forum which took place in Brussels the same week as the IHP meeting. Pictured is Mona Folkesson (from the Swedish Civil Contingencies Agency) answering questions from a conference participant on the IHP’s role and resources.
Photo: Stig Dahlén 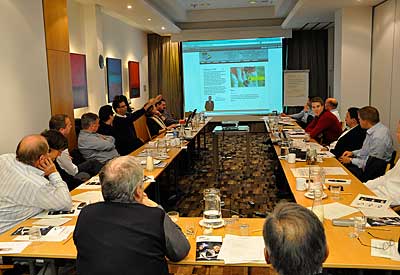 During the IHP meeting in Brussels at the end of November, the partnership launched its first website. In its capacity as the chairmanship country, Sweden has contributed to the establishment of the website. The designer of the website is Mikael Engström (pictured in the red sweater to the right). Photo: Stig Dahlén