First Deployment of Light Base Camp

As a response after the earthquake, which affected Sumatra, Indonesia, the United Nations decided to deploy an UNDAC team (United Nations Disaster Assessment and Coordination). In support of the UNDAC team, IHP co-deployed both IT/communication as well as a Light Base Camp.

Because of the effects of the earthquake on structures, it was decided to accommodate the UNDAC and IHP teams in a tented Light Base Camp. The Light Base Camp can be carried via commercial aircraft and therefore could be deployed rapidly on site in parallel to the UNDAC team.

The function of the Light Base Camp proved to be a great success; not only is it light and rapidly deployable, but moreover it also has the necessary facilities for providing relatively comfortable living and working for the first phase of an emergency. 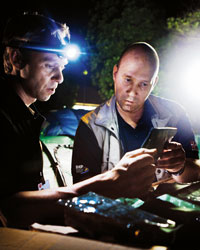